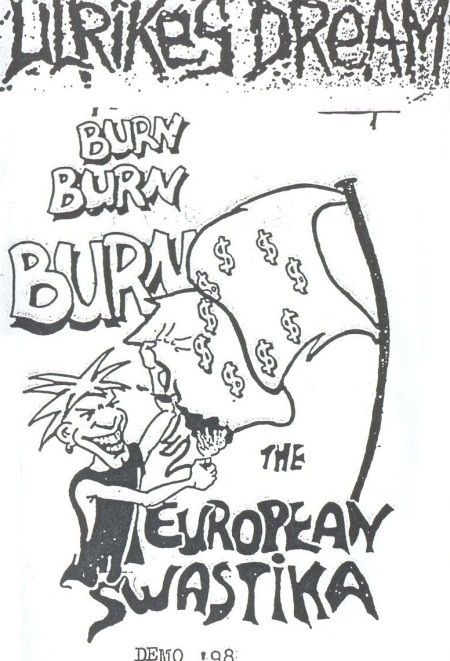 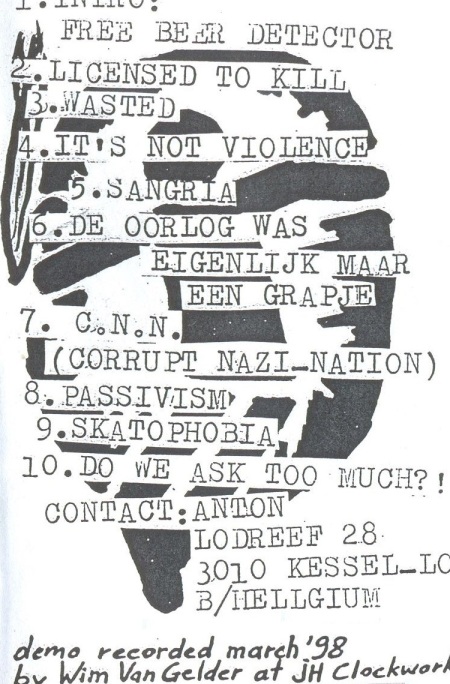 Dec 27, 1997 ‘Ulrike’s Dream’ did their first show in their hometown Leuven (@ ‘Clockwork’; supporting ‘Oi Polloi’). A few months later they played at the Vort’n Vis in Ieper (98-04-18). The band started in February ’97 when ‘Het Preekgestoelte’ split up but bassist-changes held them from gigging a lot. I believe these were the people involved: Anton Meeus (drums), vocalists ‘Sapé’ Sebastiaan Putseys (Reflex & Wolfpack recs) & Jeroen Verbeeck – later replaced by Magalie & Saar, Hans (guitar), Daan (guitar; nowadays in ‘The League of MentalMen’) and Erik (bass). The demo was recorded a month before the V.V. gig. Their DIY 7” (If It Leads… It Bleeds) by Bruno ‘Sloef’ Mastyn in July 2000. They played grindcore and sung political lyrics; some compared them with ‘Disaffect’ and early ‘Conflict’…

Some more history: “Somewhere in 1997/1998 Anton and Hans were looking for a new bass-player. They asked Erik N. to join ‘Ulrike’s Dream’. Later Johan sung for a while. After three times or so, ‘Sapé’ and Jeroen came on vox. Daan joined the guitar-squad. We played a couple of gigs: some were brilliant, some were awful. Every band has these kinds of moments. We recorded our first demo-tape in 1998. It was called Burn, Burn, Burn the European Swastika!. The sound-quality wasn’t perfect but it had a cool booklet an it sounded grind. [raw and messy] It *had* to sound grind: it was recorded in a sixteenth century basement under a grotty punk-hole [Clockwork] full of drunks and drop-outs. It was great.”.

Anton went on to play for ‘The Usual Suspects’ (anarcho ska-dub-reggae-punk; also with Hans) & ‘Cop On Fire’… 2017 is the year a new album – entitled Anarchie in Leuven – is released (by the French labels Maloka & Deviance, and the German Wahnfried recs).

Nowadays all our hits are sung in Dutch and when we used to play grindcore, it’s now more of a mix of punk, metal & crust. Our previous record Van 9 Tot 5 came out in 2011. That was still with Kim singing. Nowadays Hans does the vocals.

Hans & Anton gained their first experiences ever regarding the production of noise in ‘Het Preekgestoelte’ [pulpit]. After that they started ‘Ulrike’s Dream’. They also founded ‘The Usual Suspects’. And after that ‘Death Church’, a ‘Rudimentary Peni’ tribute-band. And I have been in ‘Les Baudouins Morts’ and the hiphop-sensation ‘Flahaut’. That covers our side-projects…

The mate that did the demo-cover and the drawing of the cop (page 4) also did the sleeve for the Anarchy in Leuven album. [more trivia on the demo] 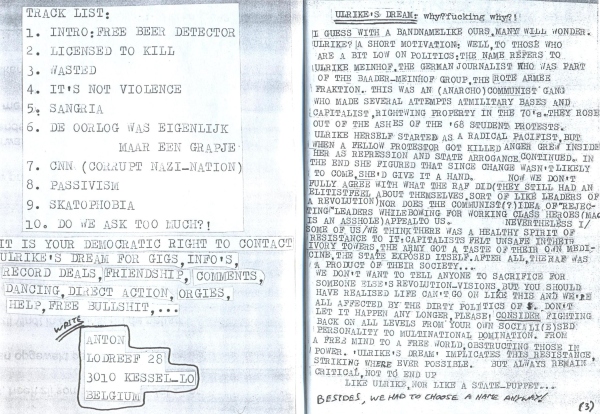 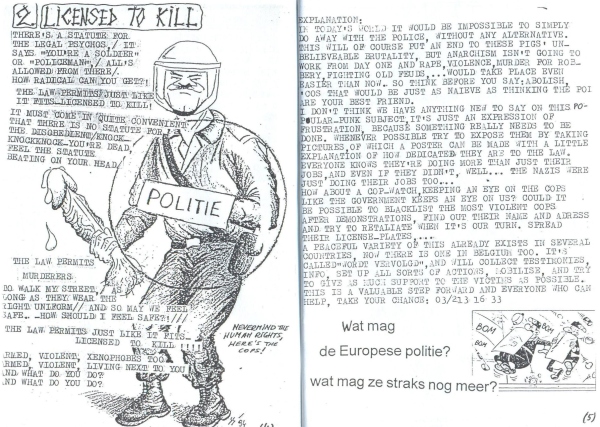 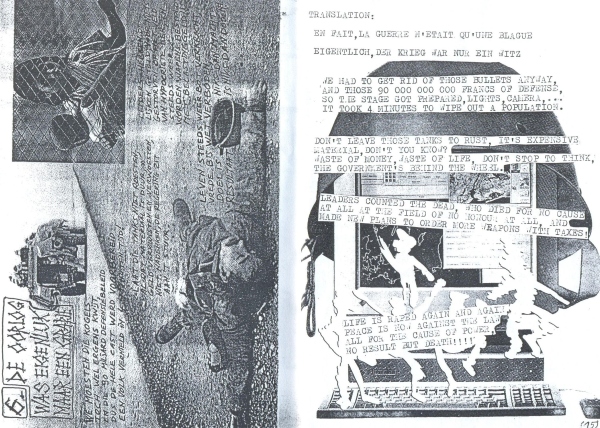 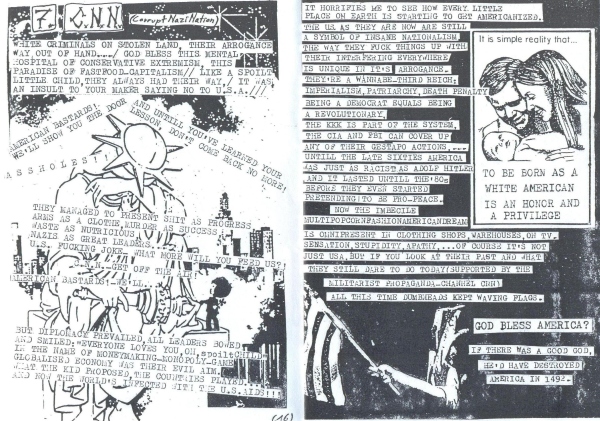 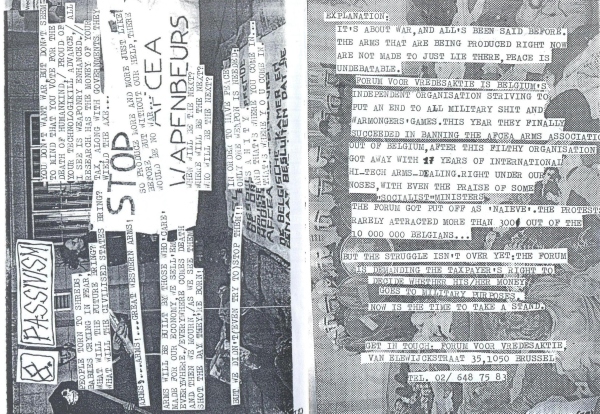 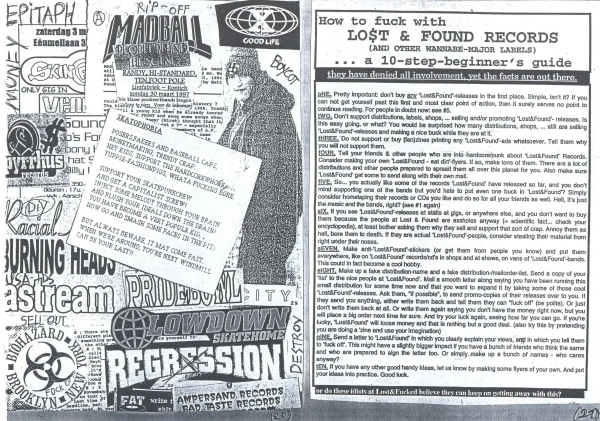 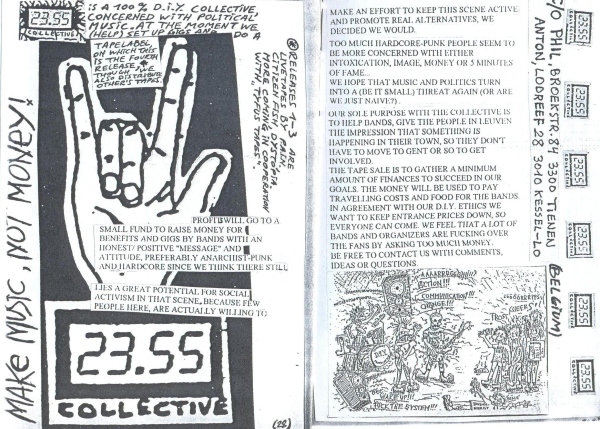 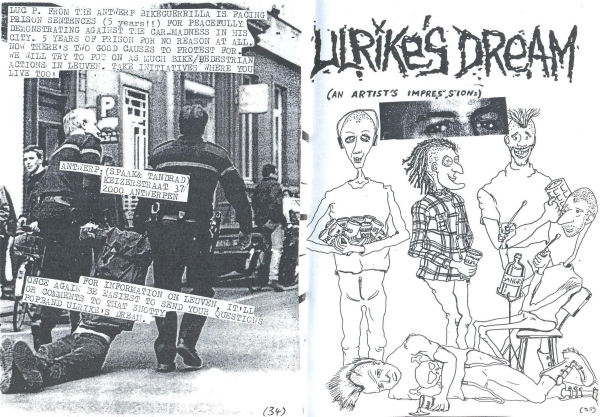 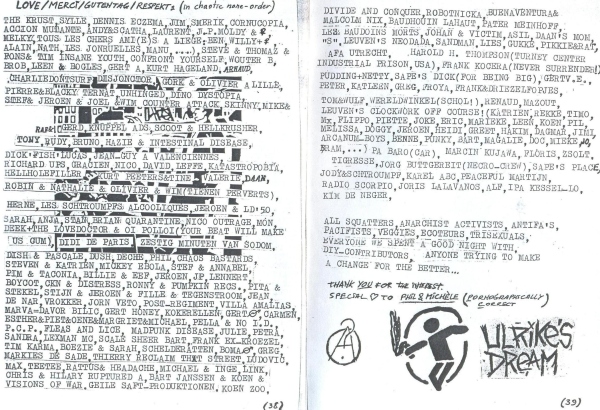