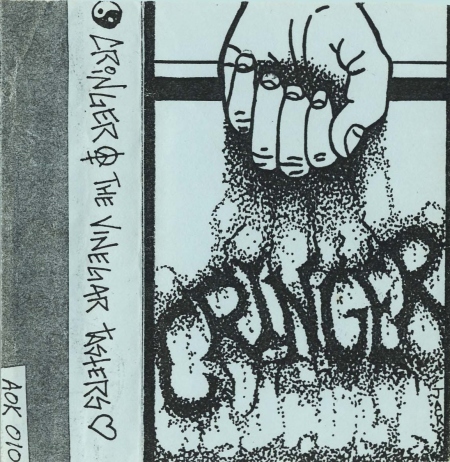 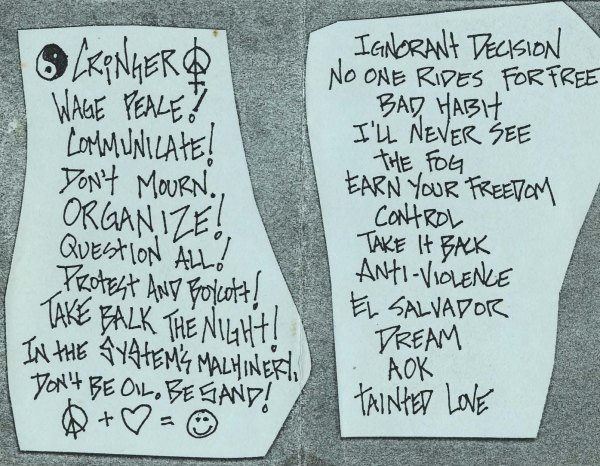 When I finally got to see ‘Cringer’ live (91-05-19; promo), they existed already for over 6 years. They did their first tape in 1985. Gardner Maxam (who later played bass) was singing in that early stage, Lance Hahn played guitar. The others were Ed Tarantino (bass) and Dave Carr (drums). This second one was recorded with the same line-up. I probably never would’ve heard these songs if Jan ‘Bux’ De Vriendt didn’t dig it up from his archives. Thanks! The Fog was a song by ‘Hypo-Depression’ (another band that Lance was in) and Tainted Love is a cover of the ‘Soft Cell‘ track… The cassette also includes 5 tracks (Nowhere To Run – [new song, no title yet] – Berlin Wall – Zen Flesh Zen Bones – Another Day, Another Death) under the heading ‘demo April 88‘… 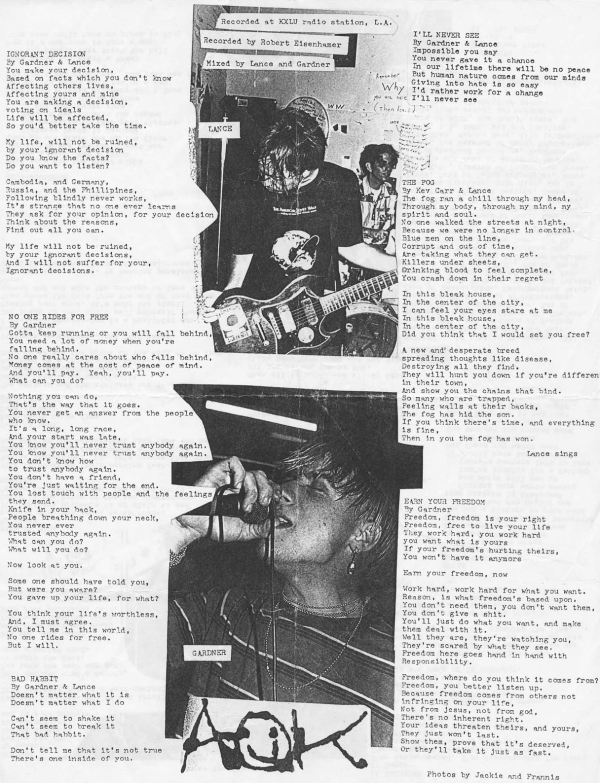 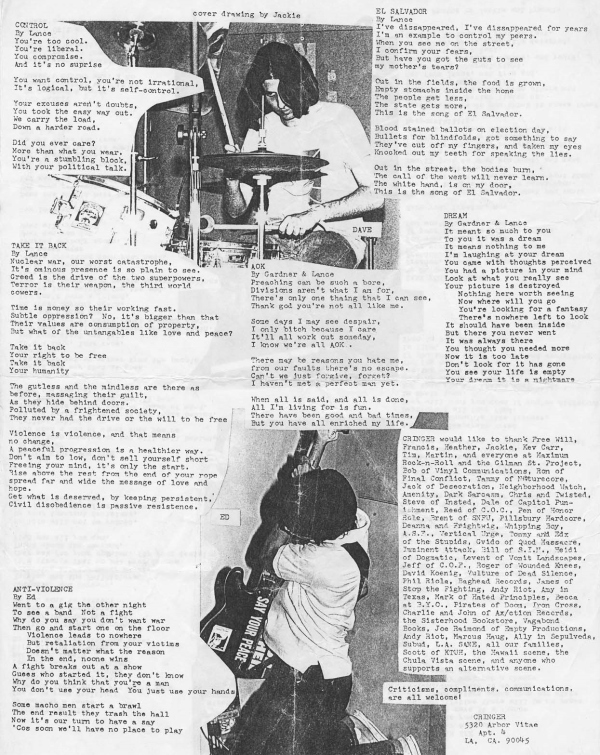 Consume – The Street Enters The House – Too Close To Home – Flowers In Concrete – Face Up To It – Cornered Rat – Believing A Lie – Into The Grey – Network Of Friends – Trapped In A Scene – When Unity Becomes Solidarity – Dedication From Inspiration – Against The Grain – Conform – Open Up (‘D.Y.S.’ cover) – Stand Proud (?) – Sick Of Stupidity – Face Up To It – Cornered Rat

Read all about this legendary Smurfpunx concert in my post on 88-01-30 and have a look at the extra photos. ‘Heresy’ played here with guitarist Steve ‘Baz’ Ballam (of ‘Ripcord’). I’d seen them for the first time at a Hageland Hardcore gig (86-10-05) but I can’t remember if this was still with ‘Reevsy’ (Malcom Reeves) or with Mitch Dickinson; when my band ‘Repulsives’ played with them (87-02-15) Mitch was the guitarist. They played at Scherpenheuvel a third time (87-08-30) – right after I tried to follow them a bit on their tour of the UK with ‘Lärm’ & ‘Heibel’ – and I ran into Micth again when he played with ‘Napalm Death’ in Wakken (87-11-07). The others were of course John March (vocals), Kalv(in) Piper (bass) & Steve Charlesworth (drums).

Review of Face Up To It! in Tilt! #4: >>Even before this record got out, some people felt the urge to vent their criticism on it. “Their style has changed.” and “They’ve become big.” were some statements that went around. The gig in Aalst surprised me positively however. The music was calmer sometimes, yes: but it sure didn’t loose any of its energy. You could hear that Kalv and their new guitarist ‘Baz’ did an effort to get away from the speedy hardcore/thrash from the split with ‘Concrete Sox’. And on the record you can hear how John did the same with his voice. Speed is still a valuable part but the mid-tempo pieces are a welcome relief by times. Rap seems to have been another influence. Where other people are not looking any further then the ‘flat’ production, I see the refreshing efforts towards versatility. They didn’t get stuck in their role, they evolve and that is far more important then what ever can be reached with technicalities in a studio. Remember what a punk-record was? And then the lyrics… “Nothing but scene-talk, everybody can do that.” (and that’s not even true, read e.g. Too Close To Home). Well, I’ld rather read and hear somebody’s honest opinion about something close to his heart then talk about big world-problems that they think they’re supposed to sing about (like a lot of bands do) and don’t live/act like it. That’s also whate Make The Connection and Cornedered Rat are about. I’m not saying “Don’t sing about politics.”! But only “Sing about things you can relate to.”! I’m not going to go into them ’cause eveything’s explained very carefully on the lyric-sheet and I can’t do any better than the writer. So now you know why I like this record so much (especially Flowers In Concrete)! Thanks lads!<< 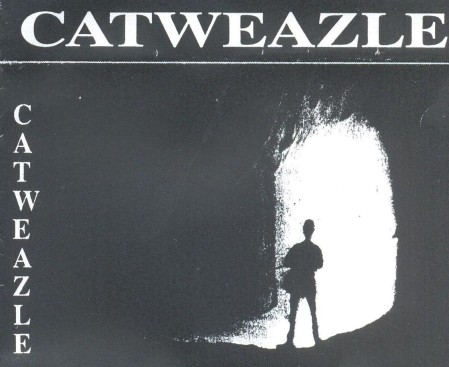 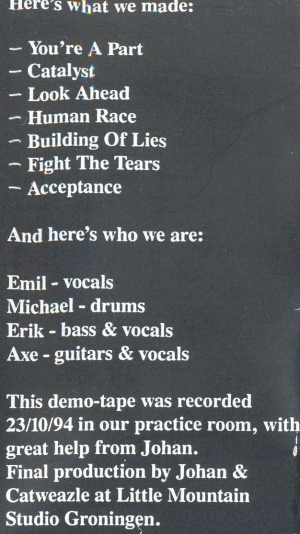 I believe I met Michael ‘Bacteria’ live for the first time at the Vort’n Vis (95-09-17) when his band played there and I would run into him when he (and his partner Eva) were travelling with bands that they did tour for… He’d probably sent this tape to get a gig. ‘Catweazle’, from Groningen, played raw, uptempo HC/punk with a metal touch. The band consisted of Michael Kopijn (drums & vocals; later ‘Tuco Ramirez’, ‘P.C.P.’, ‘Shikari’; Bacteria.nl), Erik Timmerman (bass), Emil ‘Reason’ (vocals; originally Maynard Schut of ‘Fleas & Lice’ was singing) and Axe Kooi (guitar; ‘Oene’ of ‘Fleas & Lice’ rehearsed with as 2nd guitarist for a while). They did a few tapes (2 demos in 1989 & a promo-tape in ’93, before this one here) and afterwards the Cash And Pain Remain ‎mCD (recorded Oct ’95 and released by Profane Existence Far East), a split-10” with ‘Seein’Red’ (Kangaroo recs, Wicked Witch recs ’97) and the Form Of Fear ‎7” (Bad Card recs ‘98) followed.

My review in Tilt! #8: >>Technically well-played and pretty exciting mid-80s HC. Straightforward and melodic at the same time, with some metal-tricks and breaks. Reminiscent of old-school Italian bands (e.g. ‘Indigesti’). Political and positive (not naive) lyrics. Good stuff!<< 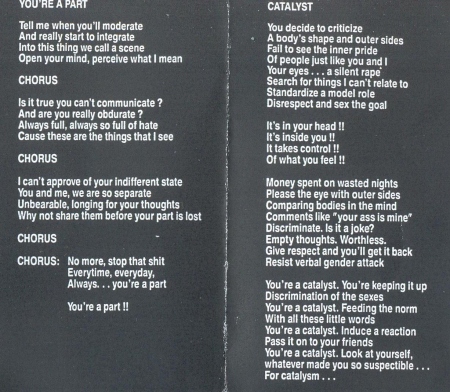 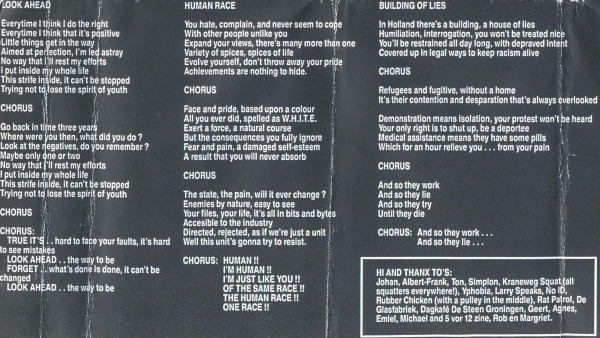 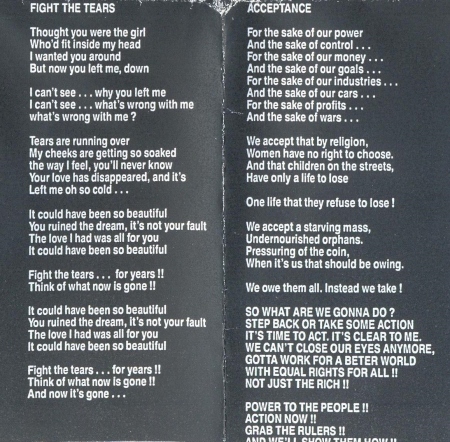 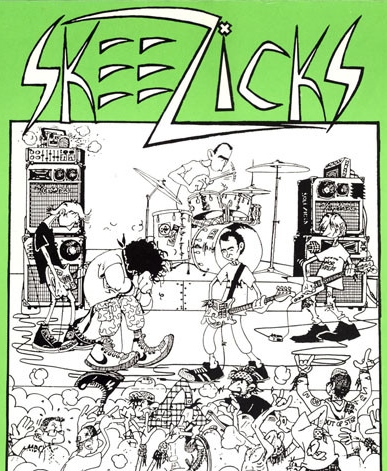 Fast/Loud – Growing Up – We Are Skeezicks – Friendship – Selling Out – Livin’ On The Country – Slam Brigade – Stupid Questions – Nothing Lasts Forever – Charlie Brown – What You Are – Blast Away – Consequences – No Second Chance – H.M. Sucks – Nothing (‘Negative Approach’ cover) – We Are Skeezicks – We’re Gonna Fight (‘7 Seconds’ cover)

After the release of their demo We Make Noise… in 1985, Armin Hofmann released their first 7″ (There’s A Charlie Brown In Everyone Of Us; recorded in Amsterdam, April ’86) on his own label X-Mist recs. (In Tilt! #2, I wrote “…They sure know how to get rid of their energy with their super-fast fun-hardcore. 7 high-quality tracks…”) A few weeks before this gig (April ’87) they had recorded for their first LP (Selling Out!). The guys playing here were (besides bassplayer Armin): his bro Andy Hofmann on drums, guitarists Carsten Bauer & Marc Helber, and singer Jürgen ‘Sunny’ Findlinger (R.I.P.). Read how I did this gig in my hometown and how legendary it became: 87-05-02. It was the second show my own band ‘Repulsives’ shared a bill with them (after 87-02-15)… 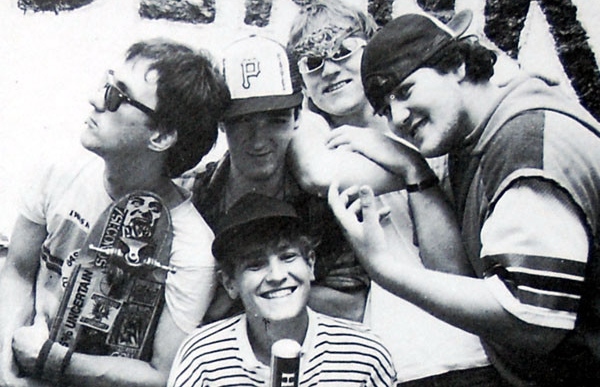