The tracks come from their debut-LP (Getting Blunt; out on David Pollack’s Destiny recs in 1986) and their second album Life (Destiny recs, 1988). The latter was recorded with ‘Rotze’ Uwe Haseman doing vocals, ‘El G’ Lars Gunzler on drums, Achim von Kredelbach playing guitar and ‘Flo’ Florian Helmchen on bass. The band was a part of the Berliner Kreuzberg scene…

Review in Tilt! #4 (Getting Blunt): >>This band is a rage on stage! Achim treats his guitar as if he’s going to strangle it, so it produces desperate, wild sounds. Everything’s supported by Flo’s effective bass and Lars’ tight drumming. When I tell Rotze I like the way he sings, he just grumbles. Lyrics are intelligent bu they tend to depress me…<< 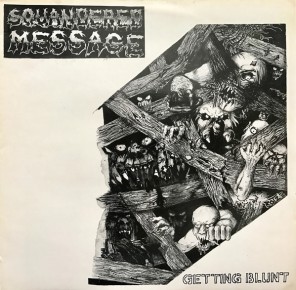