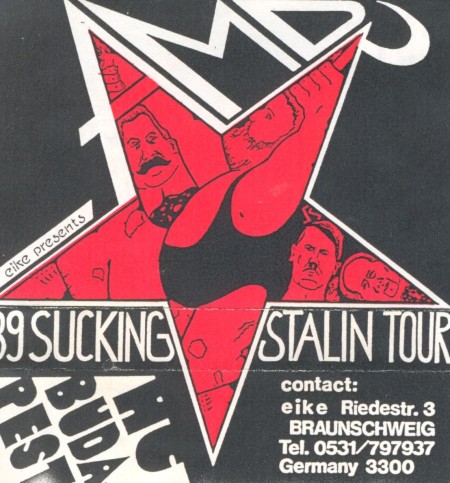 ‘A.M.D.’ (‘Anti Military Demonstration’) from Budapest, Hungary were (at that time) Sotar (vocals; R.I.P.), ‘Lörke’ Sandor Fuleki (guitar; ex ‘Leukemia’), ‘Kiskovacs’ Zoltan Kovacs (drums) and Sik Endre (bass)… Their music was metal-influenced HC/thrash and the lyrics were in Hungarian. This tape dates from 1988; it was most probably a promo for a tour they planned. The band didn’t get to play a show in Belgium a few years later, at the Vort’n Vis (92-04-18) – a tour that was managed by Esteban, brother of Macario (Alternativnoise from France). In 1991 they also released an LP out called The Horrors Of War, And Worse!

My review of their LP (in Tilt! #7): >>Energetic and fast metal-influenced thrashcore. They listened carefully to known examples in the genre (‘S.O.D.’, ‘Anthrax’, ‘C.O.C.’,…). Technically very good and powerful. Strong vocals in Hungarian. The lyrics are translated and contain quite sarcastic socio-criticisms. Very good!<< 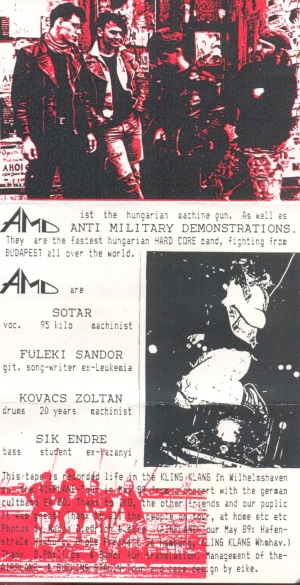 After Sotar passed away Cséb became the singer and we did a new album (Túlélők [Survivers]) but it was somehow different than before. My drug-addiction also progressed and ‘A.M.D.’ started to fall apart. The band-members changed a lot. In 2005 – when I had been clean for a while – I was asked to play again. Until that time we just played concerts in our country. The members of ‘A.M.D.’ are the same: ‘Kiskovács’ (drums), ‘Sík’ (bass), ‘Lörke’ (guitar); we asked our old friend Fido to play guitar as well. And we found a good singer: Seza. In 2012 we finished our new album. All ‘A.M.D.’ albums can be downloaded from our blog: http://amd-bphc.blogspot.hu [More info there for those who speak Hungarian.].