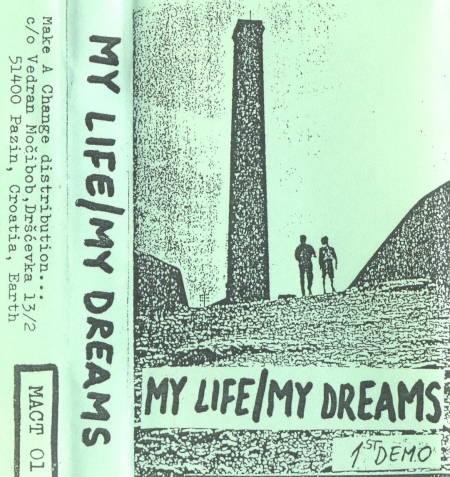 Vedran Močibob from Pazin, Croatia probably sent me this tape when we corresponded or gave it when he visited our autonomous centre Vort’n Vis. Just like myself he did a zine & distro (Make A Change)… Besides Vedran (bass/vocals), there was Siniša Družeta (guitar/vocals) & Rajic/Ray (drums). Vedran & Siniša also did a zine entitled Make A Change…

My review in Tilt! #8: >>These guys are SxE but that doesn’t show in their music, which is – by times original – HCpunk and atypical  for ‘western’ SxE bands. Under their (material) circumstances these recordings still sound more than OK. Mostly ‘positive’ and some political lyrics.<<

Someone wrote on the www: >>My Life/My Dream were active in early 90s and they probably gave more interviews for zines than they played shows but at least they released this great demo-tape which was recorded in their rehearsal-room sometime in 1993. The band’s music and lyrics were havily influenced by the early 80s Washington DC hardcore scene, especially ‘Minor Threat’. […] Some of the ML/MD members also did a few zines in the 90s, also HC/punk shows, a radio-show and a distribution. […]<<

I would say this was indeed recorded some time in 1993. I think this is the only recording we did. We tried doing another one, some sort of ‘real’ studio-recording but it was a failure, due to technical problems (if I remember correctly)… 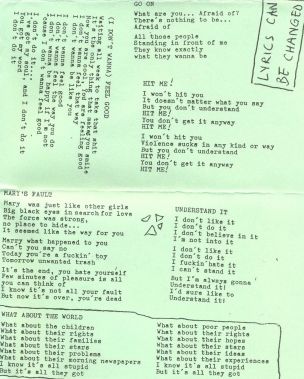