The tape was a donation of Steven ‘Stel’ R. 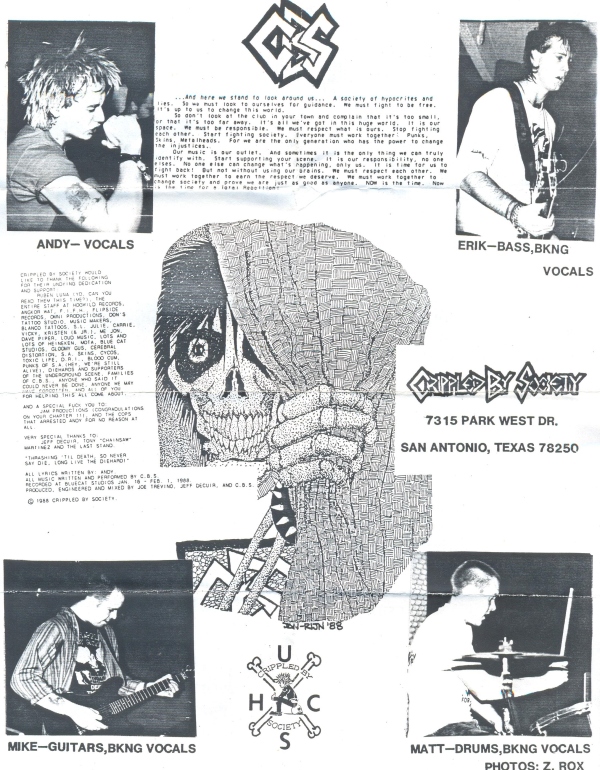 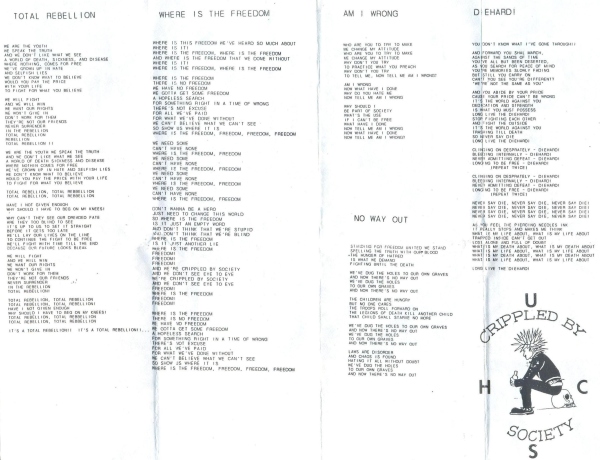 ‘Crippled By Society’ came from the San Antonio hardcore scene. The original line-up was Andy Katz (vocals), Mike Lipscomb (guitar), Erik Briedé (guitar), Mark Garza (bass) and Matt Voss (drums). It’s in your face attitude and aggressive live shows quickly developed a strong and devoted following. Early on ‘C.B.S.’ opened for headliners such as the ‘Exploited’, ‘White Zombie’, ‘D.R.I.’, etc. The band entered the studio to lay the tracks for its first demo for which final editing was never completed though the demo was released due to popular demand. A year or so later Mark Garza left the band and created the opportunity to expand its presence in the strong and well known South Texas metal scene. Andy Katz, an already solid front-man, also started to play rhythm guitar and rather than introduce a new member to the band, Erik Briedé assumed the role of bassist. This new formation generated a faster, tighter and more aggressive blend of hardcore and speed-metal that further expanded its local fan-base. The new incarnation of ‘C.B.S.’ opened for headliners such as ‘Angkor Wat’, ‘D.R.I.’, ‘Danzig’, ‘Social Distortion’, ‘Suicidal Tendencies’ and many other headlining acts on tour. The band went into the studio to record its second demo and shortly thereafter its song Total Rebellion was picked to be on the compilation Bands Only A Mutha Could Love. The new demo was very well received and ‘C.B.S.’ did several tours as a head-lining act throughout the south. For reasons that are still unclear, ‘C.B.S.’ disbanded in the early 90s and its members went in to pursue other musical endeavours. Andy Katz went on to play with ‘Cannibal Crew’, Matt Boss went off to play drums with the ‘Shit Magnets’ and Erik Briedé devotes his time with his band ‘Cross-Eyed Mary’ with Andrew Lopez (guitarist for ‘Fearless Iranians from Hell’). ‘Crippled By Society’ was included in an architectural exhibition at the Chicago Art Institute connecting hardcore bands with the places from where they came. In 2019 the band was featured in the book As Viewed From The Pit that covered the famous South Texas metal scene from the late 80s and early 90s. Also in 2019, ‘C.B.S.’s song Alcohol Slur off the first demo was included on the Taco City Rockers compilation released by Kaniption recs. Most recently discussions have been ongoing regarding remixing and releasing the second demo in vinyl, however, no date for this project has been confirmed…