In the second half of the 90s I got a letter from a Polish young woman named Anna who wrote in behalf of her partner (Przemek Gajowczyk) who was in a political crust-core band from Łódź. They wanted help booking gigs in Western Europe so I got them a few (e.g. 97-05-31 @ Hogepont squat in Ghent). They’d given me their Rich Man / Poor Man ‎7″ (on Malarie recs, ’96) as an introduction to their music and later they send some more material (also this tape – on Nikt Nic Nie Wie – here).

Around the time of the aforementioned tour Przemek ‘Przeman’ did vocals, I believe the others in the band were Marian a.k.a. Dismarian Carey (guitar), Yadwinia/Yaga (guitar), Youseph (bass), ‘Kurzu’ Marcin Glądała (vocals; he was originally the drummer) & ‘SiCore’ Marcin Sikora (drums). The line-up on this tape was ‘Przeman’, ‘SiCore’, Marian, Yaga (later in ‘Oi Polloi’, ‘Disorder’,’Anti-System’, etc.; partner of Ade Crawford) & Arek/Aro ‘Dislies’ (bass).

Early on they did a tape entitled Byt Określa Świadomość [Being Determines Awareness] for Daniel Winiarek’s Demonstracja tapes (1995). Later a split-7″ and a CD on MCR Company.

‘Kurzu’ was on the first tape and the first single, and then left the band. He didn’t do the tour…

In 97 we did a tour (our first) of almost 2 weeks (Germany, France, Belgium and The Netherlands). We met a lot of kind people and played with great bands such as ‘State Of Fear’, ‘HomoMilitia’, ‘Força Macabra’, ‘Honey Honey’, ‘Katastrophobia’, ‘Dystopia’, … It was a wonderful time and a great experience. Most of the concerts were in squats.

Afterwards we recorded material for our first LP, which finally came out in 1999. After the release of the album, Yaga left the band and went to England. In the spring of 2000 the band went through a crisis: the guitarist left and we started rehearsing with a new one; since then we played as a 4-piece. We did 2 more European tours (Croatia/Slovenia & Czech Republic/Italy/Switzerland. We released a few more records that got distributed in many. In the spring of 2005 we quit… 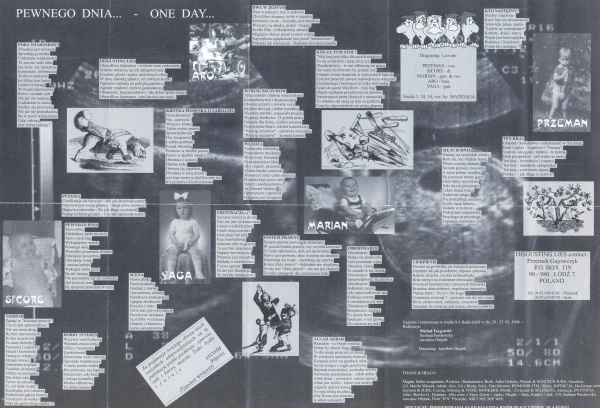 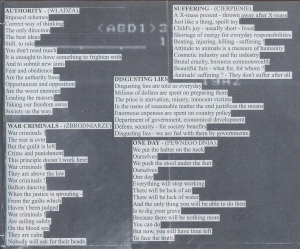